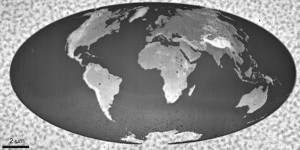 The world really is a small place. Well this map of the world is!

Scientists in Zurich have created the world’s smallest 3D map – of the world which has now been officially recognised by the Guinness World Record organisation.

The map measures 22 by 11 micrometers. Or, to add some scale, 1,000 maps would fit on just one grain of salt. IBM researchers used a new micro-small (or nano) particle etching machine to create the 3D map. A nanoscale tip – 100,000 times smaller than a sharpened pencil ,was uses to carve out the world.

Before you say this as much use as a nano sized world map, the new technology used will open the door for nano-sized computer chips and circuitry, ultra-absorbent customized medicines, enhanced optics and much more.

For a Huge World Map that you can actually read go here.