UK General Election 2015 – Where the Outcome May Be Decided

UK General Election 2015 – Where the Outcome May Be Decided

So next week is the UK General Election 2015. Great Britain currently has a lot of uncertainty looming over it, but luckily for you Lovell Johns have created a map, to help us visualise and gain a better understanding of where the election outcome may be decided.

The map was created using data from Election Forecast which shows the likely marginals across Britain. This data isn’t based on the percentage swing needed for a constituency to change hands, but instead based on where election forecasters are unsure which political party will win a constituency.

As you may already know, there’s a major element of uncertainty in this General Election, and the public are asking themselves if one party may win enough votes to win the election by an overall majority, or whether some form of relationship is to be formed between a few different parties. 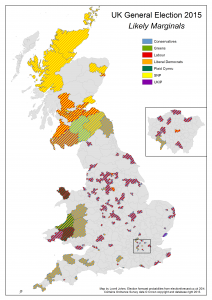 The map has to be taken with a pinch of salt, as the weaknesses in the data can obviously make for less reliable result. Can you remember back to the 2010 General Election? The forecast predictions were quite weakly correlated with the actual final outcome of the election.

Here are some key points about this map:

What do you think the election outcome will result in on May 7th? Tell us in the comments below. Click here to see a more detailed version of the map, as well as a list of likely marginals for seats across the UK.