Think again if you believe Mount Everest and Ayers Rock are in the UK!

Think again if you believe Mount Everest and Ayers Rock are in the UK! 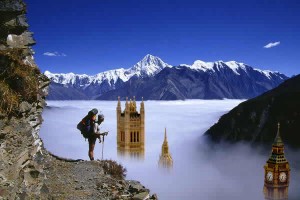 If Mount Everest was in London – Some How?

According to a recent survey more than 50% of Britons believe Mount Everest is actually in the UK, not in the Himalayas.

The survey, carried out by research service OnePoll for tour operator Journeys of Distinction, have discovered this shocking truth about our lack of geographical awareness.

20% surveyed did not know what countries made up the United Kingdom while 25% said that Ayers Rock, one of Australia’s most famous landmarks, is in the UK.

Speaking to the The Daily Mail, Karen Gee, managing director of Journeys of Distinction, said “We were astounded that while Britons clearly have an enviable and broad general knowledge of famous cities abroad – New York, Paris, Rome and many others – they seem to display a lack of geographical awareness when it comes to their own nation.

“It’s such a shame, because the UK has so many national treasures for people to experience, right here on their doorstep.”