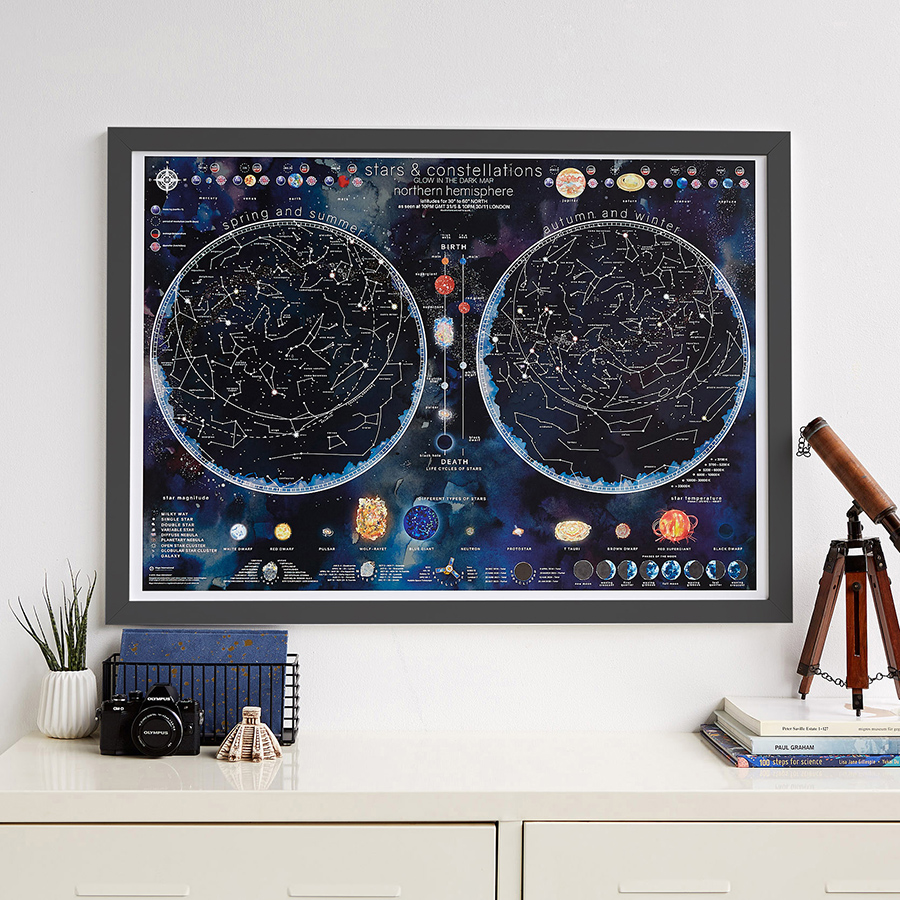 What is the Stars and Constellations Glow Map?

Our all-new Stars and Constellations Map is a stunning companion to any amateur or seasoned stargazer or night sky enthusiast. There is an almost encyclopaedic amount of information for anyone interested in the cosmos. Whether you’re just starting out with astronomy as a hobby or have always been fascinated with stars and constellations, this amazing glow in the dark map is an absolute must-have!

How to use this map

This stunning poster includes all the information about the night sky and our solar system that can either be a great introduction into astronomy, or an excellent reference point for seasoned stargazing. It details major constellations and illustrations of planets in our solar system, satellites, lunar positions, eclipse points, meteors and comets to describe just a fraction of the map! 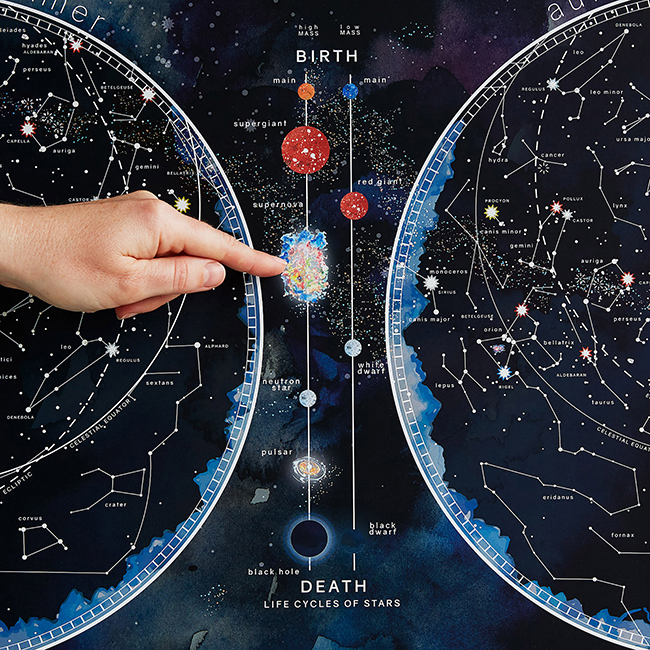 We have also taken great care to illustrate the life cycle of a star and the phases they go through, from dwarf sizes to giant ones, supernovas to black holes.

Oh, and did we mention it can glow in the dark as well?

What brings the Stars and Constellations Glow Map to life is a subtle, yet bright glow in the dark ink, that charges during the day with light, and glows for approximately 12 hours at night. Just make sure to charge it in bright light, the moment you receive it.

No more worrying about seeing the night sky on a cloudy or light-polluted night! You can take a trip through the cosmos every single night from the comfort of your home. 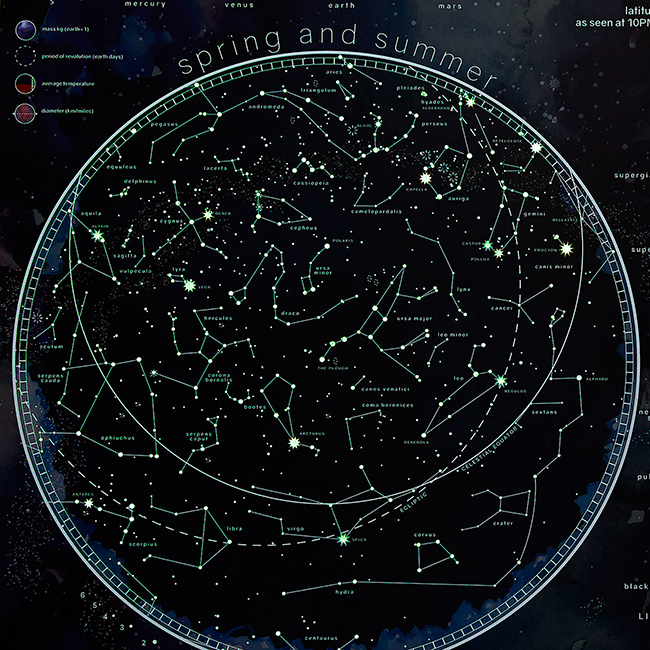 Why this map of the night sky is special to us

It was exactly 50 years ago on this day that the space shuttle Apollo 11 launched from the Kennedy Space Center in Florida. It was an audacious mission, one that would crown humanity’s greatest achievement to land a human on the moon. The Saturn V rocket carried three astronauts that have naturally become household names; Commander Neil Armstrong, Command Module pilot Michael Collins and the Lunar Module pilot, Edwin ‘Buzz’ Aldrin.

Audacious is probably the most appropriate word to describe it, because this objective was set out by President John F. Kennedy 8 years earlier, before NASA had even completed an orbit of the Earth! Over 400,000 individuals worked on the Apollo program, both men and yes, women too. While discrimination may well have prevented the idea of female astronauts, women were invaluable at NASA. Such as Katherine Johnson who was critical to the success of the very first US manned spaceflight by John Glenn. Or JoAnn Morgan the instrumentation controller for Apollo 11.

Today on the 50th anniversary of the moon landing mission, we salute these people, and remember their enduring contribution to humanity. Wherever our next mission in space might be as a species, whether we’re walking on Mars in a decade or heading back to the Moon, we’re going to need enthusiastic minds, seasoned stargazers, volunteers to a mission that sounds equally audacious and yet so close within our grasp.

Get the Launch Codes!

To celebrate the launch of this exciting map, we have a very exciting competition for you. We’ve hidden a secret Launch Code somewhere in the anagram below. If you can crack the code, you can get 20% OFF the amazing Stars and Constellations Map. 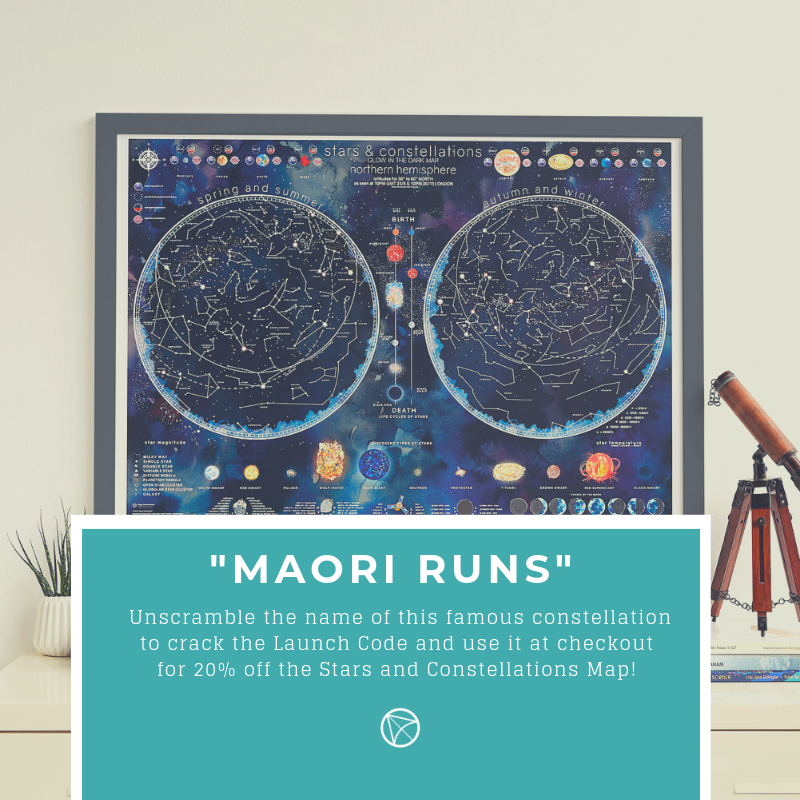 Just add the correct code to your basket at checkout without spaces, and the discount will be applied.We have 500 of these codes available to use, but just 1 per customer, so do spread the word to anyone you feel may like this contest!

Pick up the Stars and Constellations Glow Map our our website, at Maps International