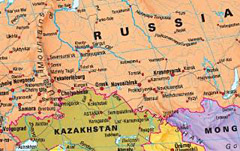 Here at Maps International were always striving to keep our World Wall Maps up-to-date with the latest International boundary changes. The World’s longest single contiguous land boundary is that between Russia and Kazakhstan and is a staggering 7,591 km long. Although defined clearly on our maps since Khazakstan declared independence from the Soviet Union in the early nineties, the same cannot be said for the actual border on the ground. This month sees the first boundary marker to be placed between the two countries, the beginning of a process that is likely to take 10 to 15 years.