Scientifically, every star in the night sky is just an enormous glowing ball of gas held together by gravity. But humans have always interpreted the stars as something beautiful and for years they have provided inspiration to explore, to dream and to learn. They have played their part in historical religious ceremonies and in navigating over land and sea. Since the beginning of astrological study, astronomers have grouped the stars into constellations, and to this day, these constellations have been retained and respected.

A group of professional astronomers, collectively known as the International Astronomical Union, list a total of 88 constellations. These are based on those listed by Ptolemy and were devised in the 2nd Century. However, Ptolemy’s catalogue of constellations are informed by early astronomical theories dating back as far as the Bronze Age.

For city dwellers, it can be hard to see constellations due to light pollution. For those living in rural areas, star constellations can be seen more clearly. Britain’s National Parks, The Scottish Highlands and parts of Mid-Wales are amongst some of the best places to view the true beauty of the night sky.

But you don’t necessarily need to leave the house to see the stars. Maps International’s newest arrival, the Glow in the Dark Star Map, gives you an accurate and clear depiction of star constellations which are all clearly labelled. This vibrant and stylish map is currently on sale through Groupon UK for a bargain price of £12 until 00:00am Thursday 14th May 2013. Buy one now! 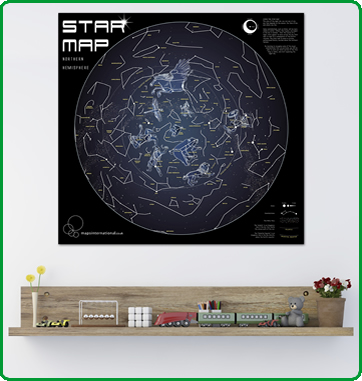