Mapping Global Stereotypes- Is that what they really think of us?

Mapping Global Stereotypes- Is that what they really think of us? 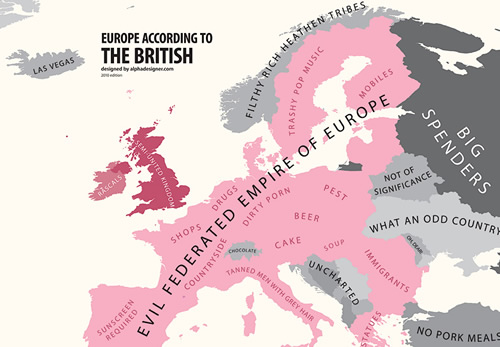 Europe According to Britain

Graphic artist Yanko Tsvetkov has created a set of satirical maps of national stereotypes. These intriguing maps although displaying some quite politically incorrect views are meant by the artist to entertain rather than re-enforce stereotypes.

Tim Dowling of the Guardian makes the point that maps by their nature a can be out of date, untrustworthy or politically incorrect. (Not if you buy our most up to date world maps). Sorry, we couldn’t let Tim’s statement go undefended. Tim does have a point though when he talks about having an ‘ignorance map’. Such a map in this ever politically changing world will have a much longer shelf life with deep rooted beliefs existing whether they are right or wrong.

Tsvetkov maps began with only a handful and when there popularity grew he made more.

He made a map of “The World According To Americans”, with Kazakhstan renamed “Borat” and the Falklands marked “British Riviera”. His map of Berlusconi’s worldview is quite something and is a real send up of the ex Italian Premier.

We should also point out that Tsvetkov is a man not as bigoted as his maps. He says,”If there is a serious problem, I prefer to present it in a funny say. I think there is enough serious coverage, and loads of people who can analyse it way better than I can.”

You can view Tsvetkov’s maps here.